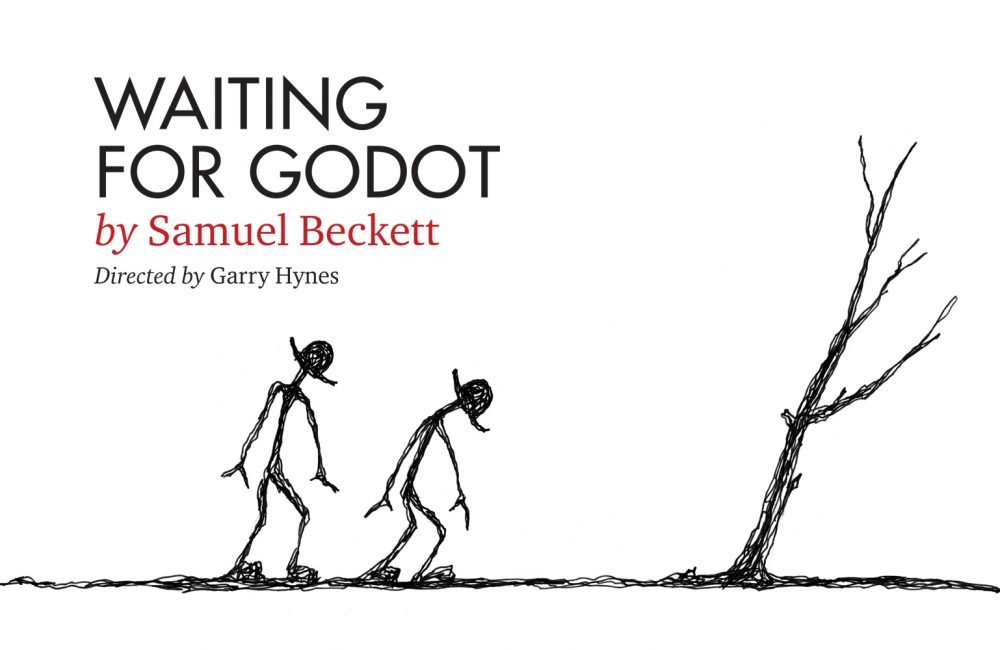 Druid Theatre’s award-winning production of Waiting for Godot embarks on an extensive Irish and international tour in 2018 and will come to An Grianán for three nights only in March.

On a bare road in the middle of nowhere, two world-weary friends await the arrival of the mysterious Godot. While waiting, they speculate, bicker, joke and ponder life’s greater questions. As dusk begins to fall, two figures appear on the horizon.

Regarded as one of the most significant plays of the twentieth century, Waiting for Godot by Samuel Beckett is a masterpiece that draws endless interpretations and Druid’s production has won acclaim from audiences and critics alike, and multiple Irish Times Irish Theatre Awards.

Druid’s interpretation of this Beckett masterpiece premiered at the 2016 Galway International Arts Festival, captivating both audiences and critics alike. There wasn’t a ticket to be had for the subsequent Unusual Rural Tour, which played outdoors in Glencree, Inis Meáin and the Céide Fields. The sell-out production earlier this year had a month-long run at the Abbey Theatre in April prior to heading to Spoleto Festival USA in June.

“Our 2016 Unusual Rural Tour showed us just how much of an appetite there is for this production so it’s great to take it to so many corners of the country, and internationally, in 2018.” said Artistic Director, Garry Hynes. “It’s also fantastic to continue working on this extraordinary show with members of our Ensemble and creative team who have shaped something very special.”

Druid actors are at the centre of the company’s creativity and a permanent Druid Ensemble was announced in 2013. The ensemble meet throughout the year and feed into Druid’s artistic programme. Waiting for Godot stemmed from the Druid ensemble and is testament to the shared commitment of both the company and the ensemble in investigating new creative possibilities.

Druid first performed at An Grianán with The Beauty Queen of Leenane in 2000.
Other productions performed here include DruidSynge (2004), The year of the Hiker (2006), The Cripple of Inishmaan (2008), The Gigli Concert (2009), DruidMurphy (2013) and most recently DruidShakespeare (2015): Richard II, Henry IV (Part One), Henry IV (Part Two) and Henry V in a new adaptation by Mark O’Rowe.

Druid began as a bold idea: to create Ireland’s first professional theatre company outside of Dublin. There were few resources with which to build a theatre company in the west of Ireland in 1975, but, through sheer dedication, and with the support of the Galway community, founders Garry Hynes, Marie Mullen and Mick Lally made this bold idea a reality. That reality has since become an international success story of extraordinary dimensions.

NUIG graduates, Garry Hynes, Marie Mullen and Mick Lally founded Druid in the mid 1970s and rehearsed in various buildings around Galway – the Jesuit Hall, The Fo’castle Hotel – before they found a home on Druid Lane. It was in that first year that Druid produced Synge’s The Playboy of the Western World and in it, found a playwright they would go on to explore and find success with at home and abroad.

The company’s first won success outside of Ireland was the Edinburgh Fringe Festival and Druid quickly gained an international reputation with productions such as At the Black Pig’s Dyke (1992), Conversations on a Homecoming (1985), and Bailegangaire (1985) featuring Siobhan McKenna in one of her finest dramatic performances.

In 1996 Druid premièred Martin McDonagh’s debut work The Beauty Queen of Leenane, in a co-production with the Royal Court Theatre. It opened in Galway and played in London, Sydney, Dublin, and on Broadway, where the production won four Tony Awards, including Best Director for Garry Hynes, the first woman to win an award for directing in the history of the Tony’s.

To this day, while Druid works with a core group of actors, designers and production crew on a consistent basis, at its heart is the working relationship between Garry Hynes and Marie Mullen, one of the most successful and significant actor-director relationships of the modern theatre. Druid founder and actor, Mick Lally, passed away in August 2010 and up until that time had been one of Druid’s core group of actors.

SUPPORT US
PrevPreviousAll Ireland One Act Drama Finals launch
NextANNOUNCEMENT from Letterkenny Musical Society re: Singin’ in the RainNext