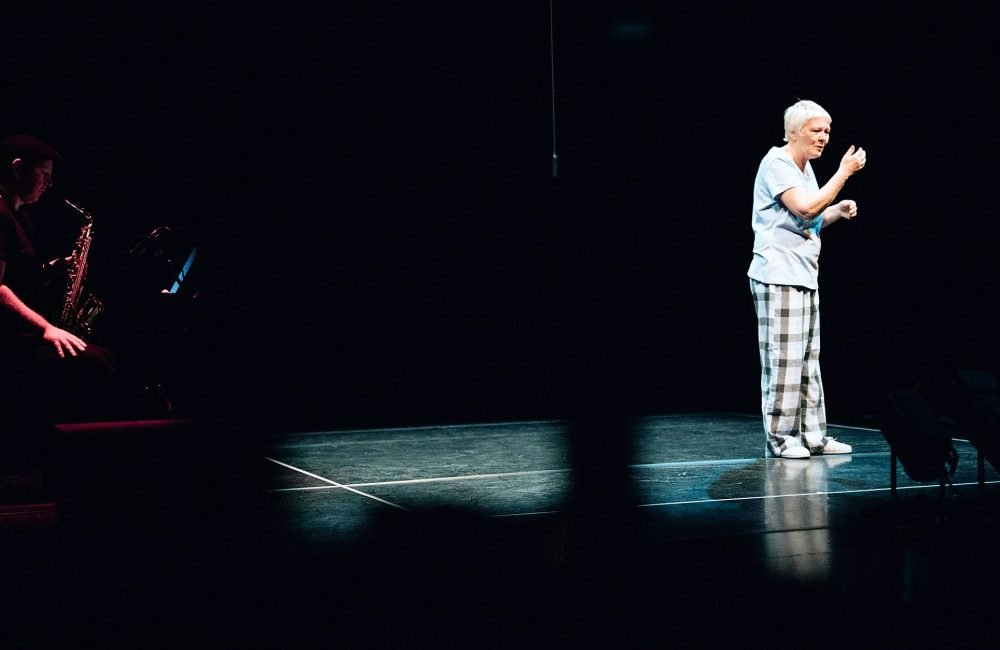 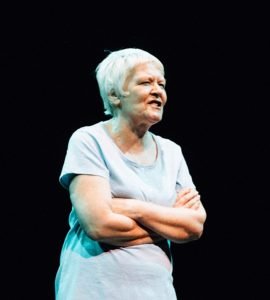 On reaching 60 in 2016, actor/writer, Carol Moore didn’t see herself reflected in contemporary Irish theatre, nor was she being offered challenging roles for her own age-group.

She felt invisible as an older woman and redundant as an older artist. For 18 months Carol has been writing and developing a one-woman play titled The Experience of Being which, following dates at the Grand Opera House, Belfast next week, An Grianán Theatre is delighted to present across the island of Ireland over the next month, including three performances in Donegal. FULL DATES HERE

The Experience of Being is a funny, absorbing and moving one-woman play about dwindling power, how to challenge it and why ageism makes growing older far harder than it needs to be. FIND OUT MORE HERE

An Grianán is going to bring you a weekly blog from the very charming, talented and witty Carol, beginning with her final week of rehearals.

Monday, 29 April
I’m very excited at the floor cloth designed and painted by Ellen Turley which we will see this week in rehearsals. Can’t say too much but the detail is phenomenal. A long discussion about the use of saxophone and a much greater presence in the play. Kevin Lawless playing a blinder. Conor Mitchell, composer, re-imagining large sections and Patrick J. O’Reilly pushing us all for more in how the sax reacts to the central character and the effect it has on her as the plays progresses. Live music. You can’t beat it

Tuesday, 30 April
So Conor went away yesterday having new musical ideas about the opening music and particular sections where the saxophone impacts with the character. Patrick and I spend the day working slowly through the script to re-visit each section. What is the function of so many memories during the dinner party? How might a person feel having been put off the road on the way to her birthday dinner and now regretting she just didn’t go home? How the alcohol consumption masks what is really going on with Cathy? I love Patrick’s questions and pushing me to justify my choices. Good decisions made today. 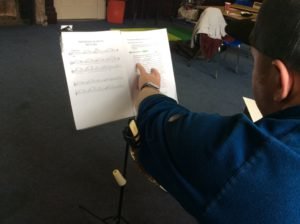 Wednesday, 1 May
The director and I are listening in to Conor (composer) and Kevin(saxophonist). They are speaking a different language, a musical language and we haven’t a clue what it means. It’s a fascinating process watching how they shorthand what the musical intention is and then Kevin just plays it. The saxophone is full on in the journey of the play reflecting the lack of power of the character Cathy, as early as primary and secondary school as well as the power of the church and the paramilitaries and with that the sense that Cathy has been fighting this battle for a long time. At 60 she didn’t think she would still be struggling with power being taken away from her, but that is what happens on the very day of her birthday. No wonder she starts on the prosecco on the way to the birthday dinner because she has just been put off the road by a male driver and everything goes downhill from there.

Thursday, 2 May
Playing on the floorcloth creates a really different sense of space, a world of 60 years of Cathy’s entire life to date. We did a run this afternoon and afterwards words like angry, painful, distressed, frustrated, lost, powerless is describing the story arc of the play; not a nice wee woman feeling sorry for herself, drinking tea and watching Coronation Street. This is a woman in crisis and she’s desperate to tell you why.

An Grianán Theatre presents The Experience of Being by Carol Moore, touring the island of Ireland this May and June. For tour locations and dates CLICK HERE

SUPPORT US
PrevPreviousCasting the Tale: Open auditions for The Winter’s Tale
NextCAROL MOORE’S AN GRIANÁN TOUR BLOG 2Next