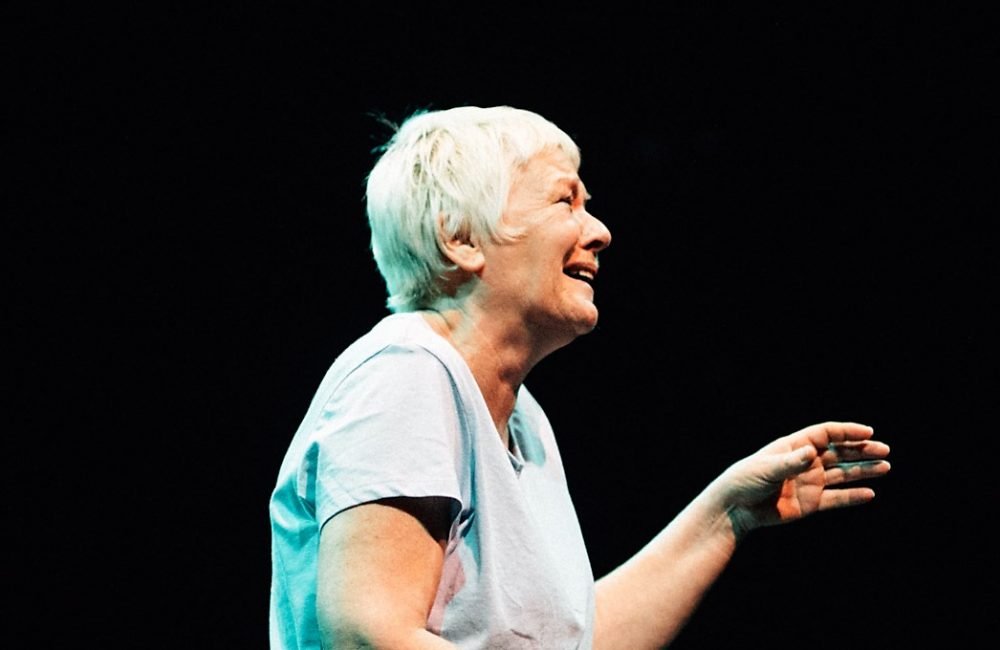 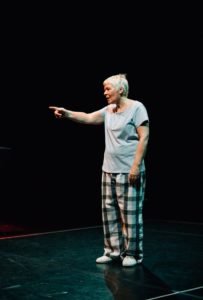 On reaching 60 in 2016, actor/writer, Carol Moore didn’t see herself reflected in contemporary Irish theatre, nor was she being offered challenging roles for her own age-group.

She felt invisible as an older woman and redundant as an older artist. For 18 months Carol has been writing and developing a one-woman play titled The Experience of Being which, following three dates at the Grand Opera House in Belfast next week, An Grianán Theatre is delighted to be presenting for ten tour dates across the island of Ireland over the coming month, including three performances in County Donegal. FULL DATES HERE

The Experience of Being is a funny, absorbing and moving one-woman play about dwindling power, how to challenge it and why ageism makes growing older far harder than it needs to be. FIND OUT MORE HERE

Carol Moore has been giving us an insight into the lead-up to Opening Night of her play The Experience of Being. Her are her latest diary entries.

Friday, 3 May
It’s Friday and we got two runs in. Taking on Patrick’s notes about the heightened state Cathy is in until she finally breaks down at the dinner table and the night isn’t over. Conor also pushing the sax which goes to dark places musically and emotionally. Actor and musician matching each other as the stakes are raised. It’s heartbreaking that a woman of 60 feels so out of control and I suspect many women in the audience will recognise what that feels like.

Sunday, 5 May
“Decision to change costume. Body image and that other taboo that we need to ditch, the pressure to look young instead of simply feeling great about ourselves. It’s Saturday and life imitates art and an early scene in the play when someone slides into the back of my car nudging me onto the roundabout. I was lucky there was nothing coming at that moment but it shook me. I really do know how Cathy is feeling. Don’t panic An Grianán, I am absolutely fine!

Monday, 6 May
Bank Holiday Monday was going to be a day off but when you are leading up to an opening night, not running the show between Saturday and Wednesday morning makes you feel uneasy. So we got into the Baby Grand to run the piece in the space. Always very different. You have to recalibrate to the new conditions – coming in from a different side, playing the raked seating, using much more voice, assessing if the journey of the play is clear and refining moments in the play that the new space is throwing up. 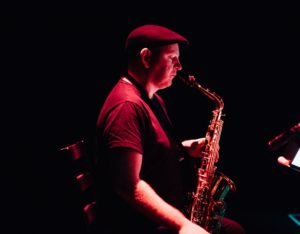 Tuesday, 7 May
Tuesday is tech day, meaning all the lights have to be focused, coloured and cues plotted. Also a big day for the setting the final music of the piece. Kevin the saxophonist takes notes from the composer but also the director refining where the sax comes in and out in sections and importantly the sound in the space. Loving the reverb. There is also a series of soundscapes under the memory sequences to support and locate them and underscore the saxophone music. I’ve used a lot of voice today so need to be careful. Then my other head is making sure all invited guests know what is happening, especially the panel, who will be discussing issues raised in the play afterwards. They include Eithne McNulty (Chair), Siobhan Casey (AgeNI), Robert Atkinson (Service User) and myself and will no doubt be very interesting.

Thursday, 9 May
We OPENED. Feels like a very long time ago when I started writing the play and it’s finally out there. A fantastic audience last night and to be supported by family, friends in the business, the Arts Council, Arts & Business, interview participants, my producer Patricia McBride and those who just took a chance and bought a ticket. Great to hear laughter and complete silence as the character takes the audience on a rollercoaster ride of emotions. Also enjoyed the post show discussion because Baroness May Blood always hits the nail on the head and in the same breath makes you laugh.

A huge thank you to everyone who helped me on the journey and particularly to Patrick J O’Reilly, my director, Conor Mitchell, composer, Kevin Lawless, saxophonist and last but not least Patricia McBride who believed in me and the play. Looking forward to seeing you all in Donegal so get booking.

An Grianán Theatre presents The Experience of Being by Carol Moore, touring the island of Ireland this May and June. For tour locations and dates CLICK HERE