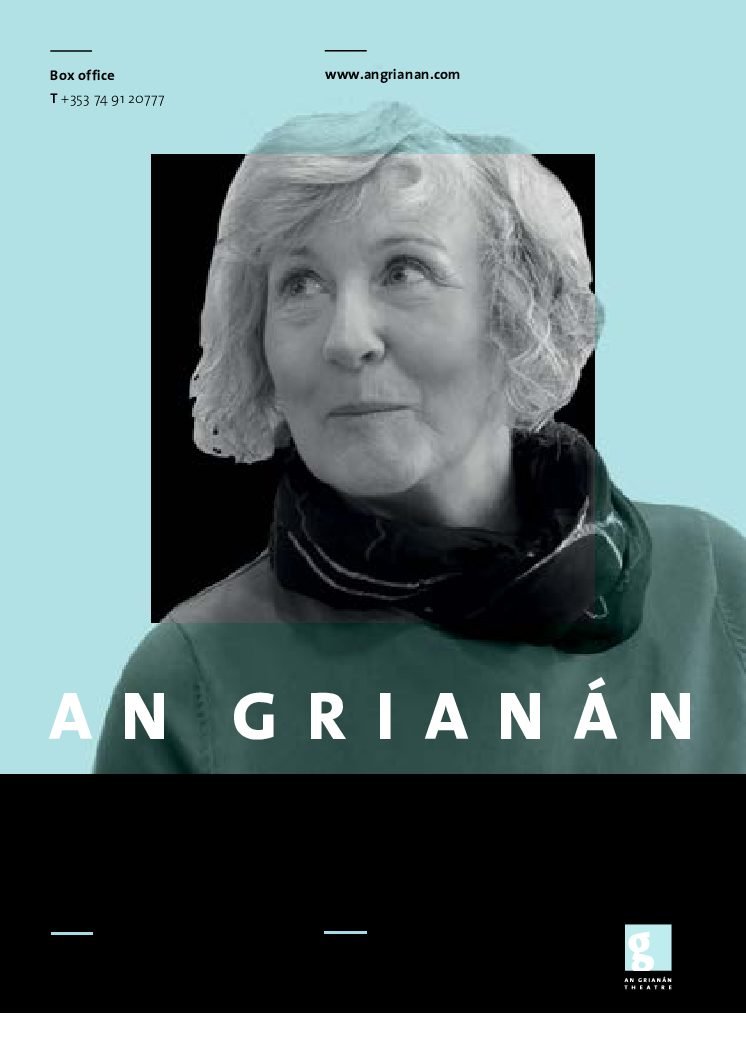 [vc_row][vc_column][vc_column_text]“A theatre at the heart of the community”

The line above is from An Grianán’s initial mission statement back in 1999.

Over the years we’ve had many brochure covers, usually featuring one or more of the upcoming shows. This, it became clear, wasn’t ideal for two reasons, one, it was almost impossible to reflect the breadth of the programme this way, and two, we were at the mercy of the promotional photos we were sent for that season’s shows.

Taking a new approach, and in line with reflections on our 20 years in existence, we realised that what matters most, and so should be celebrated, is our relationship with the local community. While theatre shows and theatre companies come and go, the community is always here, and without them, and their support we have nothing.

So we wanted to reflect this in our brochure covers and we set about thinking about who could be our ‘ambassadors’. We wanted people of all genders, all ages and from all areas of the county, who had a strong grá for An Grianán. We also wanted to avoid people who might be performing in the current season as that would muddy the message.

So we drew up a list and set about taking photographs of members of our community who have a strong relationship with the theatre, some are performers, some are regular attenders, some eat regularly in the cafe. Angel, our first ambassador is a former youth theatre member from Portsalon in the north west of the county, John, our second is a performer, writer, artist whose first stage play we produced and toured and is from Letterkenny, with very strong family ties in Culdaff in the Inishowen Peninsula.

John, our second ambassador, talked about his relationship to An Grianán here in a blog he wrote for our website …

“and as I turned pro, it was even more satisfying to return not just to the home stage, but the team behind the magic, the family of An Grianán Theatre that keeps this stage in the North West one of the best!”

You can see a lovely short clip from Jasper, our sixth ambassador, here in a video we put out on social media…

“You meet the kindest, most supportive and most creative people here, it really is just a beacon of light in the town”

This organically led to a lovely blog from a theatre/ film professional who is also a former youth theatre member, Karen Quinn …

“it’s the endless support from An Grianan that makes me realise that I’ll always be a part of their family, and every time I walk through the doors I feel like I never left. It’s a diamond of a theatre that has given me memories that will last forever.”

The brochure cover retains the form of our logo, here are the logo guidelines which was originally created by Carton LeVert, who have gone on to form the highly successful Kinnegar Brewing Co., so successful that they no longer do any outside Graphic Design despite being the winners of many awards, not least a European Design Award in 2006 for this logo for An Grianán.

The logo is  a typographic visualisation of performers on a stage. It has four components: 1. The Auditorium – the rectangle/block. 2. The Stage – the coloured square within the black Auditorium. 3. The Audience – the letters of the name ‘An Grianán Theatre’ represent the audience viewing the show. 4. The Performer ‘g’ – represents the character on the stage. There is an extensive family of Performers and they appear at random. There is therefore no one single An Grianán Theatre logo, rather a family of logos from which any one may be selected. The Performer-g represents the diversity of theatre and performance at An Grianán.

For the cover design, our current Graphic Designers, OD Design wrote that:

This approach affords the opportunity to showcase the diversity and far reaching influence of the theatre and the engaging nature/community it represents – placing the audience at the centre of the the logo therefore at the centre of An Grianan. Our intention with this solution was to “strengthen the sense of closeness with the people of An Grianan”. As the Ambassador changes seasonally with the brochure the story changes too allowing this solution to talk to a variety of different audiences.[/vc_column_text][/vc_column][/vc_row]

SUPPORT US
PrevPreviousCan You help raise €1000 for An Grianán Youth Theatre?
NextMusic for Shaking the TaleNext