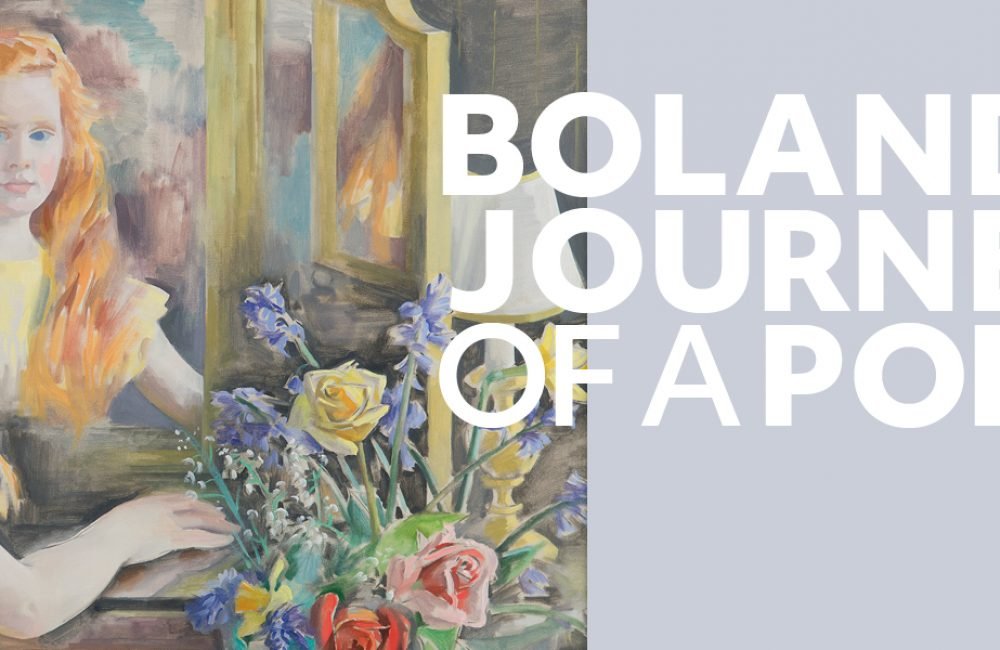 Druid at Home presents Boland: Journey of a Poet
Early Bird tickets available until Sunday 11 April
Booking Links:
Live Shows, Thur 22- Sat 24 April
On Demand, Tues 27 April- Sun 2 May
Captioned Performance
The on demand performance of Boland: Journey of a Poet is available with captions. To view with captions, please book an on demand ticket. Once you activate your on demand video link, an option to view with captions will be available on the video page.
Post-Show Discussion
There will be a live post-show discussion following the live stream performance on Friday 23 April. Garry Hynes, Colm Tóibín and Siobhán Cullen will be joined by moderator Jody Allen Randolph.
‘If there was a narrative to my life in those years, then let this be the sound of it.’
With words by Eavan Boland, edited by Colm Tóibín and directed by Garry Hynes, Boland: Journey of a Poet is a new theatrical production exploring the mind and imagination of one of Ireland’s great poets. Performed by Siobhán Cullen (Once Upon a Bridge,The Cherry Orchard, DruidShakespeare:Richard III), and live streamed from The Mick Lally Theatre in Galway, this world premiere production examines Boland’s relationships with family, poetry, memory, womanhood and national identity.
Also, inspired by Eavan Boland’s mother, the expressionist painter Frances Kelly, Boland: Journey of a Poet will feature the Irish artist Debbie Chapman live on stage who will create a piece of art in response to the production. The poster for this production also features one of Frances Kelly’s paintings, a portrait of her daughter Eavan Boland as a young girl.
Boland: Journey of a Poet is the latest in the Druid at Home series of online theatre. Previously, Druid presented the world premiere of Sonya Kelly’s Once Upon a Bridge and an encore screening of their 2020 production ofThe Cherry Orchard.
How to Book and Watch
Live Stream: Thu 22-Sat 24 Apr
On Demand: Tue 27 Apr-Sun 2 May
Early Bird tickets available until Sunday 11 April
There will be four live stream performances of Boland: Journey of a Poet from The Mick Lally Theatre in Galway between Thursday 22 and Saturday 24 April. Boland: Journey of a Poet will then be available to view on demand between Tuesday 27 April and Sunday 2 May. You can view the performance on your computer, tablet or phone. You can also cast it to your smart TV. Duration: 60 mins approx.
Join the conversation:#BolandJourneyOfAPoet #DruidAtHomeBoland
Boland : Journey of a Poet is presented in partnership An Grianán, Letterkenny; Backstage Theatre, Longford; Dunamaise Arts Centre, Portlaoise; Glór, Ennis; Lime Tree Theatre,Limerick; Pavilion Theatre, Dun Laoghaire; Siamsa Tíre, Tralee; Town Hall Theatre, Galway;and The Everyman, Cork.
Credits
Words by Eavan Boland
Edited byColm Tóibín
Directed by Garry Hynes
Performed bySiobhán Cullen
Director of Photography Colm Hogan
Set Designer Francis O’Connor
Costume Designer Clíodhna Hallissey
Sound Designer Sinéad Diskin
Composer Conor Linehan