Coming soon: Postcards from the Ledge 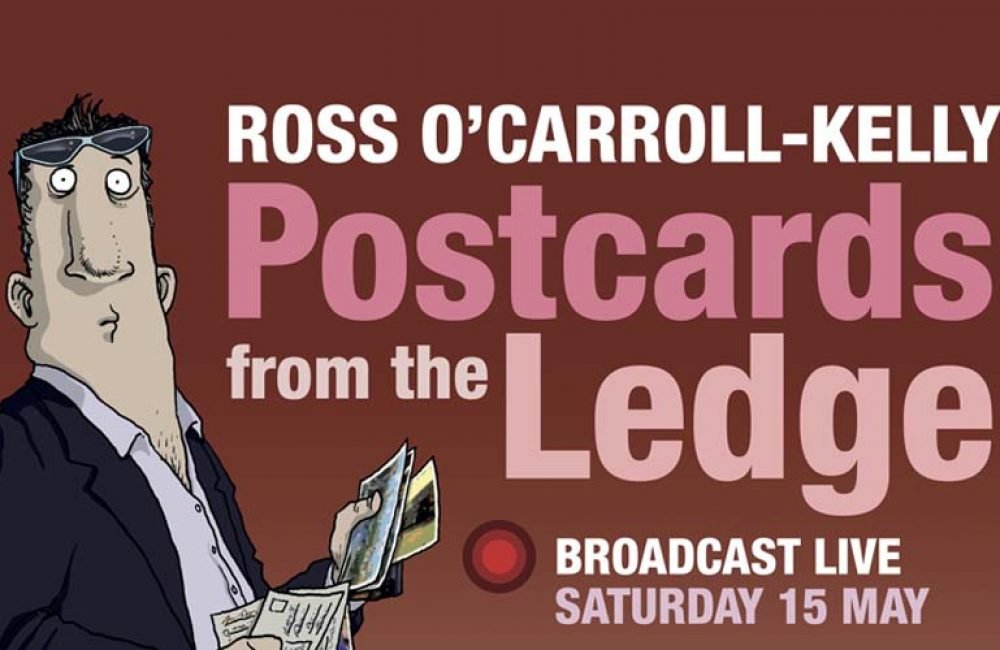 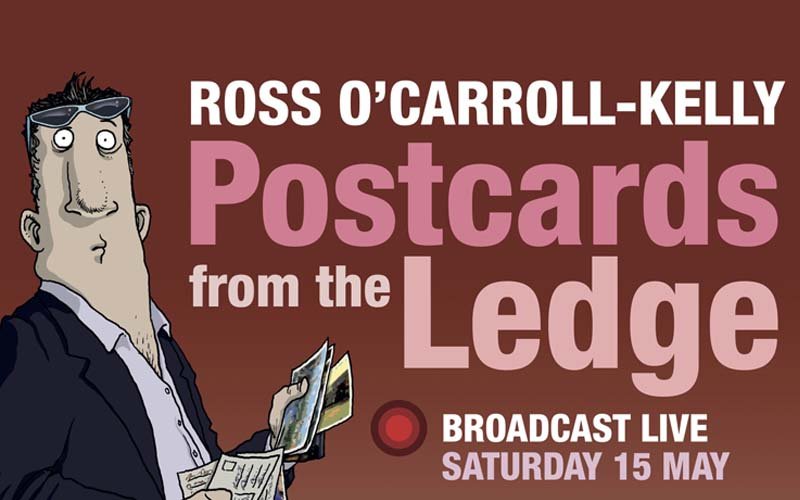 Ross O’Carroll-Kelly is having a one-night stand – with the whole world! And you’re invited!

Presented by Landmark Productions, Ross O’Carroll-Kelly’s hilarious Postcards from the Ledge starring Rory Nolan is coming to your gaff with a guarantee of ‘laugh out loud, hilarious good fun’. (★★★★ The Arts Review)

Broadcast live on one night only, and beamed into homes across the globe, don’t miss a date with the ledge and ‘two hours of unadulterated fun’ (★★★★ Irish Daily Mail) on Saturday 15 May.

The year is 2029 and Ireland is in the midst of an economic boom. Ross O’Carroll-Kelly is about to turn 50 – and life could not be better for him. His wife, Sorcha, is the Taoiseach. His triplet boys are the backbone of the Castlerock College Junior Cup team. And he still does alright with the ladies. But Ross’s daughter, Honor, is about to get married and that’s when the trouble really begins.

Ross O’Carroll-Kelly is the star of the much-loved, best-selling series of books, and a weekly column in the Irish Times, by the award-winning writer, Paul Howard. Rory Nolan’s masterful performance as Ross has been drawing standing ovations since he first brought Ross to life on stage 14 years ago. Now you can applaud him from every room in your house!

A must-see, don’t miss your chance to make a date with the Ledge this Saturday 15 May.

Presented by Landmark Productions, Postcards from the Ledge is broadcast live from Mermaid Arts Centre in Bray.

“The Rossmeister General is coming to your gaff! And the lockdown isn’t going to stop me! That’s right, people! I’m taking my act from the stage – and into your bedroom! Or your living room! As a matter of fact, you could go totally mad and enjoy me in every single room in the house! My one-man show,‘Postcards from the Ledge’, is returning – and it’s being live-streamed. So whether you live in Foxrock or New York, Cork or Cape Town, Limerick or Sydney, you can have me over for the night. Call it a date. And as usual, there are no strings attached.”

Paul Howard’s character Ross O’Carroll-Kelly started life in a newspaper column almost twenty years ago. He has since become the star of a critically acclaimed series of books that satirised Ireland during the years of its economic boom and bust and have sold well over one million copies in Ireland alone. He was named Irish Newspaper Columnist of the Year in 2013 for his weekly column in the Irish Times, one of the most widely read in the newspaper, and has received a record three Irish Book Awards.

“I’m absolutely thrilled that ‘Postcards from the Ledge’ is going to be staged again and that it’s going to be done for an online audience. I’m particularly happy that people will get another chance to marvel at Rory Nolan’s masterful, two-hour performance, which drew standing ovations in live venues all over the country. He is a truly world class actor and I feel privileged that he’s going to be stepping into Ross O’Carroll-Kelly’s Dubes once again.”