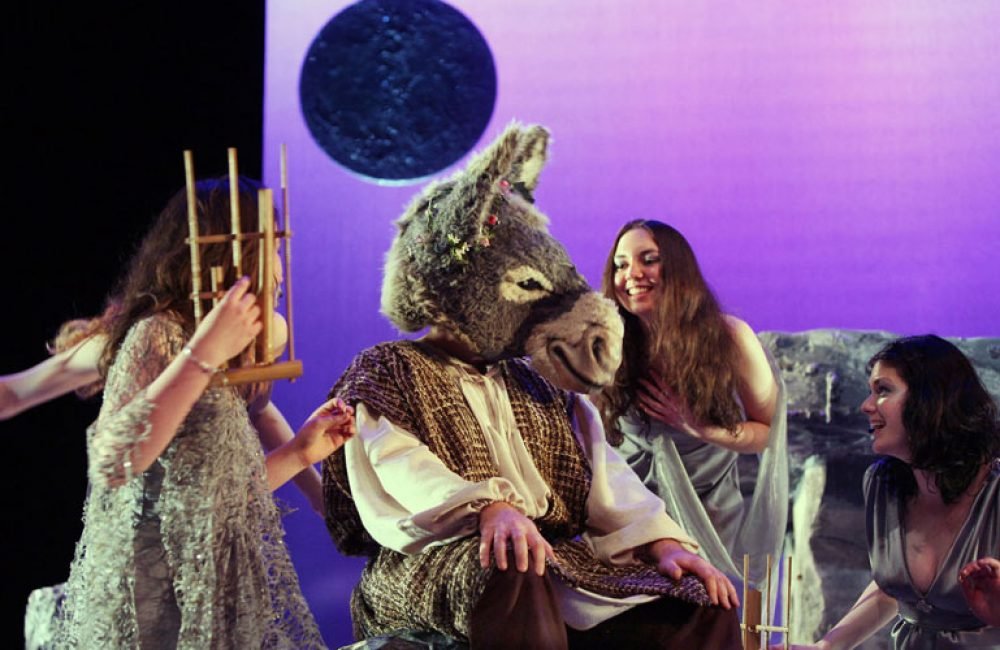 This production of A Midsummer Night’s Dream was produced in association with and financially supported by the Earagail Arts Festival and Donegal County Council. Like the production of The O Neill which we produced for the 2007 Earagail Arts Festival, A Midsummer Night’s Dream included a large cast of talented community actors, under the artistic direction of David Grant.

Shakespeare is the world’s playwright: when I was at the Dublin Theatre Festival during the city’s year as European Cultural Capital in 1991 we welcomed no less than four Shakespeare productions from as far afield as Romania, Germany and Japan. In each case, the plays were reinvented in the language of the visiting company with an assurance that almost made us forget that they had originally been written in English. But in Ireland, not least because we have enjoyed such a special facility with English, Shakespeare has always seemed peculiarly alien. The number of productions at the Abbey Theatre, for instance, in a hundred years can be counted on the fingers of two hands.

At the heart of this discomfort is the sense that although the language, despite its archaic usages, is familiar, it is hard for us
in Ireland to hear the words in a recognisable way. Although many memorable film adaptations (notably Baz Luhrmann’s Romeo and Juliet) have challenged the assumption that Shakespeare must be delivered with a clipped “received pronounciation”, we are still all too prone to unease when as audiences our expectations of RSC accents are denied. And yet, research (and the very rhymes and rhythms of the plays themselves) suggests that Shakespeare would have spoken with the broader vowel sounds associated with the today’s Northern Irish voice.

So when I got the chance to work with the many fine actors in the current cast, many of whom I knew already from The O’Neill last year, and we decided that Shakespeare was the ideal vehicle for their talents, I was adamant that this production of A Midsummer Night’s Dream should be in a Donegal voice. In making this choice, we follow the lead of the Yorkshire-based Northern Broadsides Theatre Company, who are famous for bringing the flavours of northern English to the language of the Bard. But what we have found as we have experimented with the range of Donegal accents available to us is just how well the language suits the local voice, which releases an added sense of immediacy in this most magical of Shakespeare’s plays.

I am a great believer in the idea that accent evokes landscape. Seamus Heaney captures this idea succinctly when he writes of the placename, “Anahorish, soft gradient of consonant, vowel-meadow”. And Niall Cranney has matched the colours and the flavours of the play’s language brilliantly with his bold set and serene lighting, complemented by Joanne Quigley’s sumptuous costumes. The Henry Girls have added further magic with their specially commissioned a DoneGal Dream! score, drawing on the musical traditions of the region while blending them with a wider European feel. Music and costumes both help define the play’s three distinct worlds of Fairyland, Theseus’ Court and the antics of the ‘Rude Mechanicals’. We hope that as you share tonight’s performance and are transported into the mysterious world of the play with its sprites and hob-goblins, its majestic poetry and its slapstick fun, you will at the same time feel entirely at home.