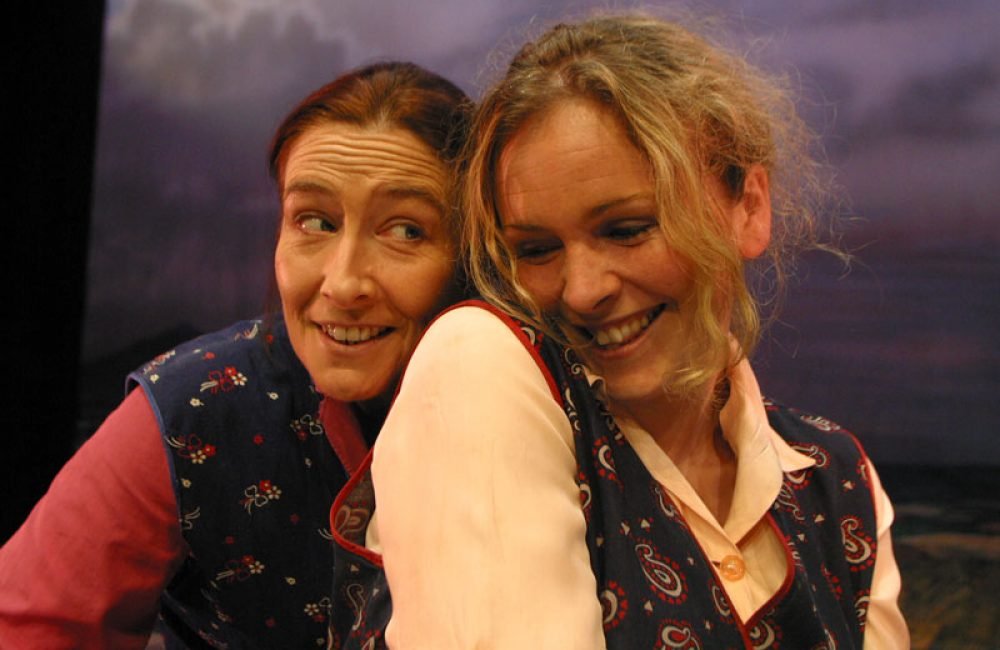 Set in the turbulent times of 1936, the five unmarried Mundy sisters live in a modest cottage at the heart of a rugged farm outside Ballybeg, a small town in Donegal. The imperious teacher Kate the irreverent big-hearted keeper of the hearth Maggie, the serene familial rudder Agnes, the sweetly eccentric and simple-minded Rose, and the lonely romantic Christina, who has tarnished the family reputation with an illegitimate son; all are heavenly bodies revolving around the 8-year old love child, Michael.

Dancing at Lughnasa is told from his memories, summoning back to the end of that summer, on the eve of celebration to the harvest deity, Lugh, god of music and light. But the celebration of the play . . . the music and the light of it . . . really lives within the sisters, a gift they share with each other and the ones they love. They are a family marked by the unfailing courage they possess for each other. But now it is on the threshold of autumn, where events will conspire to irretrievably change the golden season of the Mundys.

The following is a programme note kindly written by Brian Friel for our production.

DONEGAL IN THE THIRTIES

It is an accepted belief that Ireland in the Thirties – and counties like Donegal in particular – was a grim and depressed place, a land without hope. And indeed even a casual knowledge of what we call the ‘economic climate’ of that time offers us a dispiriting picture. Emigration was bleeding the country. Money was scarce. A very large portion of the population had a very difficult struggle to make ends meet.

And we have come to believe, too, that the economic climate so overshadowed, so blighted our lives that we became a crabbed, narrow-minded and deeply unhappy people. That we became passive and introspective. That poverty so crushed us that joy became altogether foreign to us. That families merely endured in a kind of dour sulk, silently waiting for the black clouds to break. When we consider the Thirties we think that the whole notion of what it is to be human has to be rethought, redefined.

It is not the function of a play to take issue with economic facts, but it is the function of the playwright to slip behind statistics and listen for the other existence, the inner life, the life of the spirit and to pick up its pulse even in the most depleted times. Although the Mundy girls were not destitute, they certainly weren’t affluent. An extra penny on the weekly grocery bill is a reason for anxiety. And Maggie’s task of conjuring an adequate meal for eight people out of three eggs doesn’t suggest wealth. And Rose and Aggie, who knitted day and night, still didn’t earn enough to clothe themselves. In economic conditions like these I believe that greater demands are made on the inner life and that it is the responsibility of the spirit – and indeed the imagination – to meet those demands. It is those demands and the responses of the spirit and the imagination to them that are the concerns of the playwright. The Mundy girls (they weren’t girls, of course; they were women; but girls was the language of the time) had no idea they lived in an economic climate of any kind. But they did experience deprivation and depression. And they experienced, too, happiness and great, great joy. And in their brief stage-life each is vibrantly alert to, and uncannily in sympathy with, every nuance of her sister’s thoughts and emotions. They engage with life, all of life. They want to dance, both in defiance and in delight. They give the lie to the belief – the cliché, really – that Ireland in the Thirties was populated only by a suppressed and sullen people. They offer us evidence that the ‘economic climate’ of that time is not the whole story. Another story, perhaps a truer story, certainly a more comprehensive story, resides in the inner life, the life of the spirit. And that life, whatever its difficulties, is unquenchable.

SUPPORT US
PrevPreviousHansel and Grettel, 2001
NextThe Twits, 2002Next