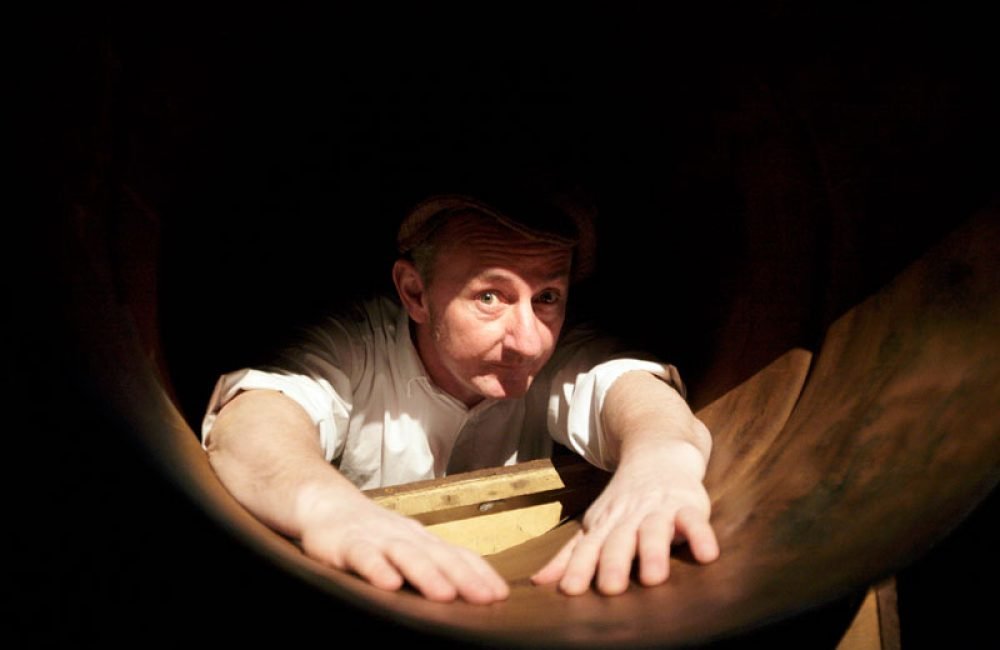 Little John Nee is a Donegal artist with a huge back catalogue of work.  As a Donegal artist his work is very much grounded in the historical and contemporary issues which we face in this North West corner of the island, and his work shows a keen understanding of the particular issues that affect the border dwelling communities.

This six month residency programme featured a retrospective of his work including talks, master classes, workshops, exhibitions and a publication. At the heart of the residency was three plays from Nee’s extensive back catalogue:

Little John Nee is an unlikely gangster as he makes his entrance in The Derry Boat. Cued by a dissonant crunchy electric guitar chord, Nee, as Shugie O’Donnell, crashes through the door of a corrugated metal shack in a rumpled black suit and tiny sunglasses, waving a gun and toting a large suitcase. This sets the stage for an unlikely roller-coaster ride that tells the funny but poignant story of the four generations of migration between Ireland and Scotland. Originally commissioned by the Earagail Arts Festival in 1998.

Originally commissioned by the Axis Theatre Ballymun and the HSE in Donegal this play focuses on the rich history of St Conal’s Hospital in Letterkenny. The story centres on misfit Joe Boyle as he struggles to find a safe place in the world, a journey that lead will him down a road of frustration, isolation, and ultimately breakdown.

Set in 1959, Rural Electric is the story of one of the last parishes in Donegal to get the “electric”, and as such reveals the epic achievements of the brave E.S.B. workers as they battle the elements putting up poles and stretching cable across inhospitable hills. A host of characters step forward from the mists of time to inhabit this fictional parish in a truly inventive one man show that combines physical theatre, comedy, original music and even a car chase! Rural Electric was originally commissioned for the 2004 Earagail Arts Festival through the Donegal County Council Public Art programme.

Little John Nee is a creative artist with a singular combination of skills. He is an accomplished writer, actor, storyteller and musician. He has a unique voice, which speaks very clearly about the experience of this corner of our island. He has an excellent ear for the dialects and idioms of speech which are resonant here. However his stories and plays are not parochial, they are filled with humanity, humour and pathos and have a universal appeal.

It has been a real pleasure to work closely with John on this residency and I am extremely proud of the work that he has achieved on the theatre’s behalf. A central plank of the programming strategy at An Grianán Theatre since it opened has been to offer a platform to the artists of Donegal and to also to showcase those talents throughout the country. We have successfully achieved this through numerous projects including our own touring productions.

This opportunity arose through Peace III, which was looking for arts projects which would address issues of sectarianism, racism, plus social and geographical isolation in the border communities. I could not think of an artist whose work could more suitably fill that brief. The three plays we selected, which are published here, are particularly relevant to the themes of Peace III.

The residency also created the opportunity for John to share his skills as a creative artist with community groups and other arts practitioners. The workshop programme focused on issues relating to Peace III and did so in a warm and interactive manner making the workshops easily accessible for seniors groups, young people and members of the new communities.

Audiences at performances have been very appreciative and the feedback from the community groups who participated in workshops has been warm and enthusiastic. I am confident that the residency has captured the hearts and minds of the community both here in Donegal and in Derry and Tyrone and has left a lasting legacy of enjoyment and understanding for all those involved.

During each two month period of the residency we presented a workshop programme around each play exploring its themes, undertaking performances and working closely with the target groups.

The theme of the workshop programme was “From Inspiration to Realisation” and it aimed o create a short effective workshop, linked to performance, deepening the participant’s understanding of the elements that go into creating theatre as well as creating a doorway to access their own creativity. This is a gentle exploration of creativity with an emphasis on beauty and having fun and how this affects our well-being.

The workshop programme was specifically targeted at senior citizen and people with difficulties assimilating in a modern Ireland such as HSE clients. A secondary aim of this project was to showcase the strength of the dramatic tradition which is produced in Donegal, and to create a cross border showcase for one of Donegal’s leading artists.

From young immigrant men to Traveller women, secondary school teenagers to university students, HSE clients, older peoples groups and theatre creatives: stories shared are colourful, some are melancholy and others are humorous. In Little John’s hands all are precious.

Accompanying Little John as he travelled the potholed highroads and byroads of the Northwest with a ukulele and a well pressed suit jacket on his back has been a real privilege. Renowned in this corner of the island for our hospitality and true to form, we were always greeted with welcoming smiles and a steaming pot of well brewed tea.

The theme, delivery style and format of the workshops undertaken by Little John as part of his residency have varied greatly. This is a measure of the versatile artist he is, adaptable in his approach working with diverse community groups. Though the profile of the group changes from session to session, the constant is Little John’s talent of seeing each for who they are, settling down with them and creating a space where an openness and gentleness of story sharing prevails. “It does your heart good,” whispered one lady to me as she drained her cup and wiped the tears of laughter from her face.

Workshops linked with the three performances, The Derry Boat, The Mental and Rural Electric, have an emphasis on our shared past and how this influences our cultural identity and sense of belonging. Memories of what times were like for those who travelled on the Derry Boat, who lived and raised families in Scotland, who left families behind in Ireland are recounted from first and second hand experiences by workshop participants.

And of those for whom the Derry Boat itself was not a part of their past, inside the yellow brick walls of St Conals a factor in their present or of those for whom the flame went out when electricity came in; the universal theme of needing to belong is central to all. After seeing The Mental, an elderly gentleman came to me and said: “Thank John for me. It is important that we all see this show.” Audiences and workshop participants nod in agreement, laugh in recognition and sigh in the knowledge of a shared understanding. “I have three words,” one woman commented: “Light, informative and beauty.”

As part of the residency we published ‘A Donegal Trilogy’, a book featuring the scripts of the three plays in the residency programme. This marked the first time that Nee’s work had been published.

SUPPORT US
PrevPreviousThe Snow Queen, 2009
NextEchoes of Time, 2011Next