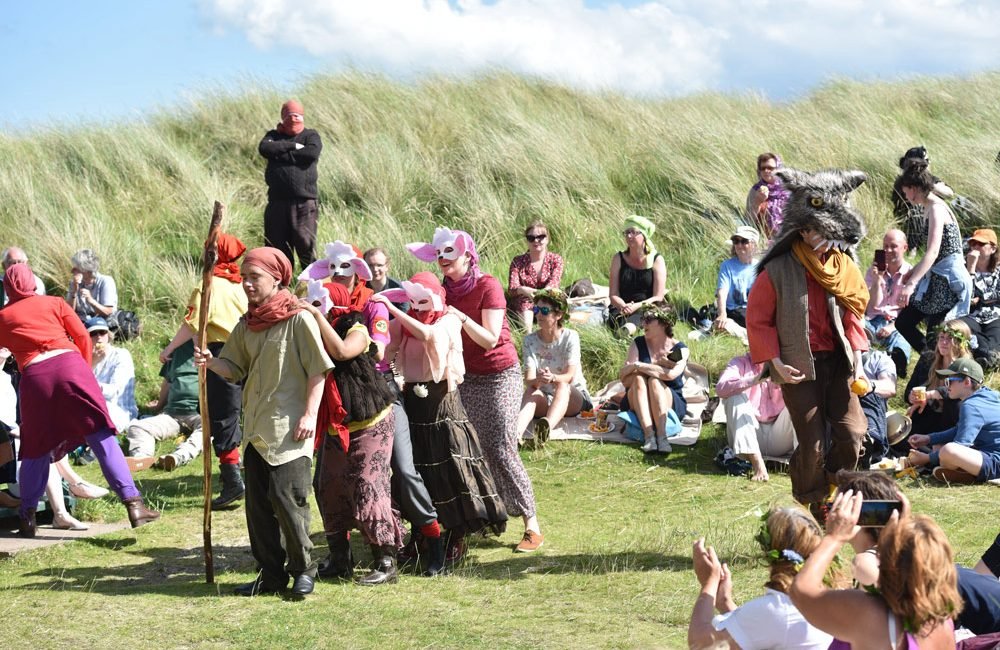 Produced by An Grianán Theatre (IRE) and Parrabbola (UK) this large scale, immersive community theatre production crossed the borders, the traditions and the waters of the north west.

This immersive promenade show featured live music, a garden party, food and for our Inishowen performances, a ferry crossing.

Our Letterkenny performances were in An Grianán Theatre (Fri 19 July, moved indoors due to poor weather),  Ballymacool Town Park (Sat 20 July) while our Inishowen performances (Tues 23 & Wed 24 July) took place either side of the Foyle with the show including a ferry ride from Greencastle to Magilligan and back.

Emilia, principal lady in waiting to Hermione – Marie Kelly
Iras, a singer, and lady in waiting – Christiona McGettigan
Samina, nurse to the Prince Mamillius, and a valued member of the Royal household – Laura Dunne

Polixenes, King of Bohemia, childhood friend of Leontes – Tom Nelis
Florizel, his son, a prince – Jasper Lee Kardos
Narcisa, a noble woman in the Bohemian court and the Kings trusted messenger – Louise McCrossan
Theodora, a noble woman in the Bohemian court, sent as emissary to Sicilia – Triona Burke
Archidamus, captain of the King’s private ship, and a respected member of his entourage – Fionn Robinson

The Shepherd, an unlearned old man, farming and living simply in a remote rural community – Eoghan Mac Giolla Bhrigdhe
The Clown, his son, an honest but simple man full of hard work and loyalty – Oscar Murtagh
Perdita, a foundling, taken in by the Shepherd and brought up as his daughter and The Clown’s sister – Laramie Carey
Tereza, a country lass who sings very sweetly and prefers making music to making hay – Maryann McDonnell
Autolycus, a rogue – Patrick Quinn

The Guides, who lead us through the story, and police Sicilia and Bohemia – Siobhan Coyle, Ciara Cunnane, Nicky Peeters, Guy Le Jeune

Production dedicated to the memory of Matt Marks, composer of Daffodils and Autolycus’ Trio.