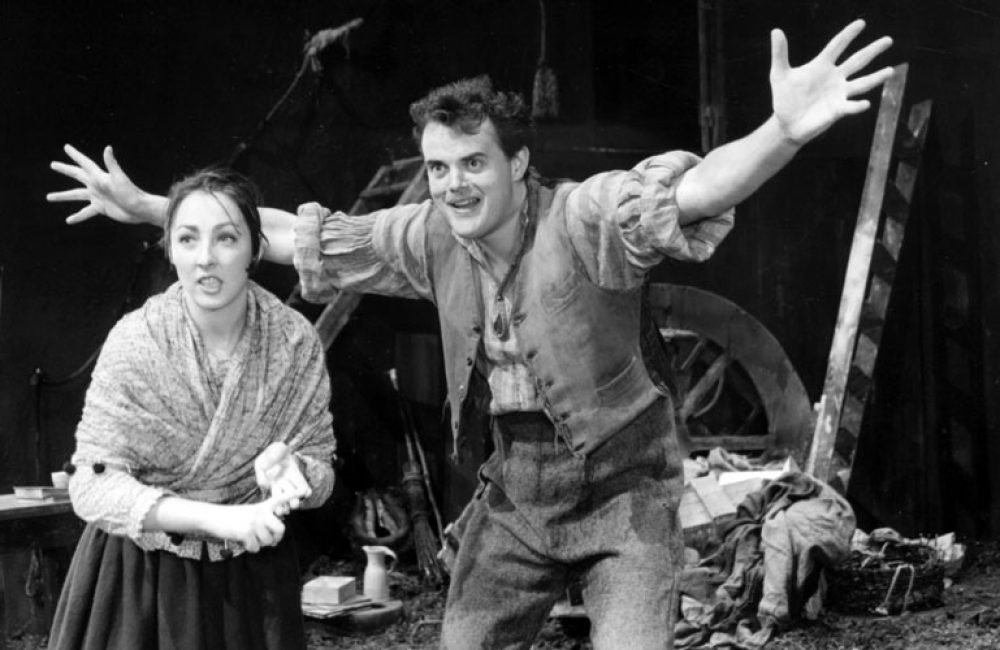 Translations was An Grianán’s first in-house production. It toured Ireland shortly after An Grianán first opened its doors to the public in October 1999.

Set in the Donegal village of Baile Beag/Ballybeg in 1833, as a new map of Ireland is being drawn up by the British Army. All placenames must be Anglicised. This threat to their culture stirs passions among the locals with consequences that are in turn romantic, comic and tragic.

Passionate, witty and thoughtful: the dialogue is exquisitely crafted.

Translations, with its emphasis on Donegal, was a natural choice for An Grianán’s first production. An Grianán is dedicated to establishing a quality base for the performing arts in Donegal, and bringing the many talented Donegal artists to a wider audience.

The opening of a new theatre is an occasion rich with joy and opulent with promise – not unlike the christening of a baby.

I’m sure An Grianán will provide many with joy and grow into a sturdy and important centre where the North West will hear stories about themselves and look at versions of themselves and derive some familial pride from the experience.

I am pleased that Translations is the first play being done at An Grianán. Although the ambition of the play reaches beyond the geography of Donegal, it is rooted in Donegal and the people of Donegal. And I hope that the people of the North West who see the play will travel with it beyond the topography of our own area but that they will also find some recognition and parental satisfaction in looking at and listening to versions to themselves.

Programme note by Patricia McBride, Director of An Grianán Theatre

It is appropriate that Translations by Brian Friel is the first in house production by An Grianán Theatre. Of all Friel’s plays I think this one speaks the most eloquently about the people and culture of Donegal. Translations will be the first of many productions which offer a platform to the wealth of talent from Donegal and celebrate the distinctive culture of this Northwest corner of the island.

Like our colleagues in Fada Theatre Company from Ballybofey we are committed to offering the highest standard of artistic excellence to the theatre going public.

An Grianán Theatre is Ireland’s newest theatre. It aims to be a theatre at the heart of the community offering entertainment, education and development projects and opportunities for participation in all the arts for all the community. It will be a platform for the distinctive culture of Donegal and it will promote the works of local artists both professional and amateur across the art forms, as well as producing and co-ordinating artistic projects including performances, classes and workshops.

Originally published in the Translations programme.

SUPPORT US
NextAlice’s Adventures in Wonderland, 1999, 2000Next