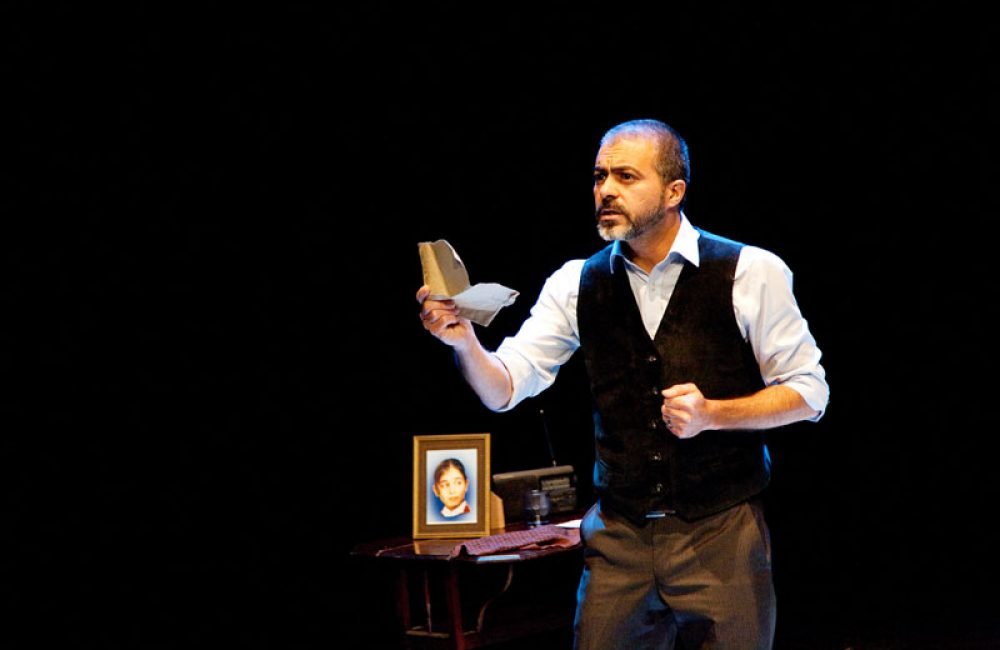 The play Bassam is about one man’s journey from violence to non-violence and explores the broader moral themes of forgiveness and hope during the Israeli/Palestinian conflict. The play demonstrates parallels with issues of conflict resolution in Ireland. At the core of the story, the play asks of its audience: ‘What motivates people to say no to violence and choose the road to peace?’

Bassam is a one man show based on the true story of Bassam Aramin, a Palestinian peace activist whose daughter, Abir, was killed by a border soldier on 16 January 2007. From the age of fifteen, Bassam spent seven years in an Israeli prison for attacking Israeli soldiers during the first Palestinian uprising in 1987. In 2005, Bassam co-founded the Israeli-Palestine peace movement, Combatants for Peace (CFP). CFP is a group of ex-Israeli soldiers and former Palestinian prisoners who have joined together to end the Israeli-Palestine conflict through dialogue and community action.

Two years after founding CFP, Bassam Aramin’s daughter Abir died as a result of a shot to the head from a rubber bullet. In spite of his personal tragedy Bassam continued his peace work.

The play Bassam was written in 2008 by Idan Meir, a former Israeli soldier. Idan spent five years in the military and saw a dozen members of his unit, including his best friend, killed in fighting in southern Lebanon in the late 1990s. The pain was one of the things that moved me to search for different ways of dealing with ‘the enemy’. When I met Bassam I wanted to bring his story to a place where people could hear and see what is going on and show them that the pain of ‘the other’ is just the same as our pain.

Each performance of the play which is approximately 50 minutes long is followed by a post show discussion workshop facilitated by Idan Meir.

Bassam is played by Fadl Mustapha.

Bassam was performed at a play reading at An Grianán in Nov 2011 with Charlie Bonner as part of the One Donegal Festival.

This project is part-financed by the European Union’s European Regional Development Fund through the EU Programme for Peace and Reconciliation managed for the Special EU Programmes Body by Donegal County Council.

SUPPORT US
PrevPreviousA Bag of Queens, 2012
NextThe Freedom of the City, 2013Next