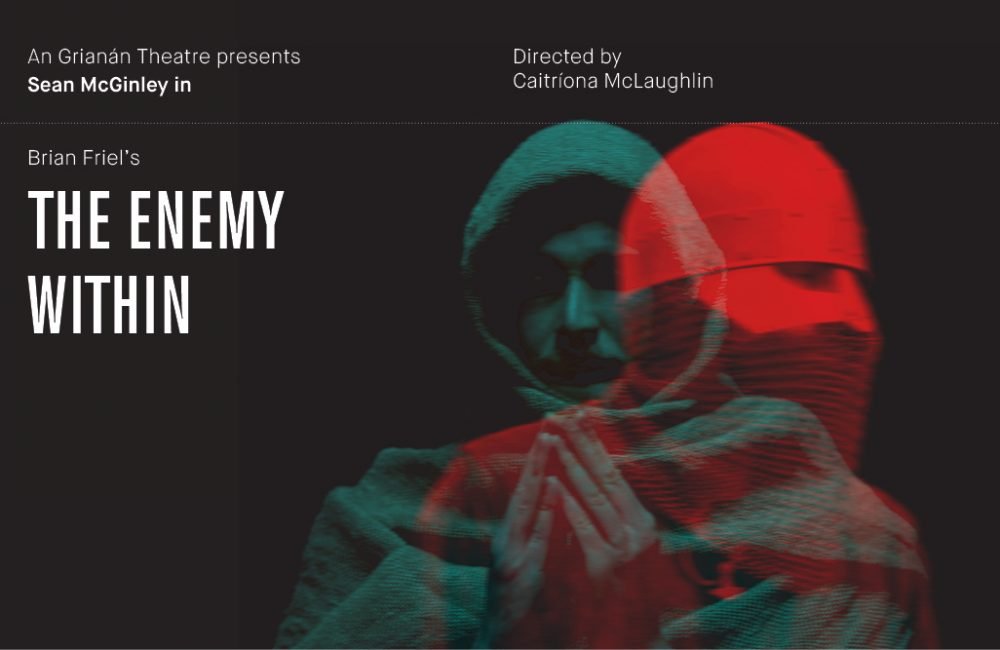 The Enemy Within
By Brian Friel
Directed by Caitríona McLaughlin

Produced by An Grianán Theatre as part of the Colmcille 1500 commemorations, which celebrates the life and legacy of Colmcille 1500 years from his birth.

First staged in 1962, The Enemy Within is Friel’s fictional account of the voluntary exile of Columba. It looks at St Colmcille as a mature man, now settled in his monastery on Iona yet still subject to the demands of his turbulent family clan back in Donegal.

We’d like to thank Dr Brian Lacey and Dylan Roach for their help with research on the production. Sinead McPhilips, Darragh Ramsay, Aoife Toner, the staff at the Regional Cultural Centre, Eimear Murphy and the Abbey props department, Browne’s printers, Donegal Stationery, and Guy Barriscale.

Early medieval Ireland is a fascinating place. The history is patchy, but we do get glimpses of what life might have been like through the records left behind by the scholars and scribes of the time, when a heretofore oral culture was set in writing for the first time. While cities of stone were cemented to the map of continental Europe, in 6th century Ireland (Ériu) we find a rural, agrarian society, in buildings of ‘hewn oak’, emerging slowly, but thoughtfully from the Iron Age. This is not to say these Gaels were backwards or unsophisticated. Irish remember, after Greek and Latin, is the oldest literary language in Western Europe. There were no towns or cities that might house a cathedral, but what we do find is a proliferation of monasteries. While Europe entered the Dark Ages, Ireland developed a reputation as ‘the school of Europe’, where the elites sent their (male) children to be educated for free in monastic schools renowned for their teaching and learning. Future bishops of Paris and kings of England were among those educated in these schools. English kings fluent in the Irish language and culture if you can believe it.

Ériu at the time was a patchwork of some 150 kingdoms called túaths. These túaths were both a territory and a people, bound by a common, often mythical ancestor. In the case of Columba, that ancestor is Conall Gulban, son of Niall of Nine Hostages, progenitor of the Cenél (kindred) Conaill, after whom the túath of Tír Conaill is named. Each túath had their king, and each province an over-king, with a high-king perched precariously above them in Tara. Power struggles were frequent and murderous, often within the confines of an extended family. Various branches of the descendants of Niall, the Uí Néill, held the high kingship for large swathes of time in this period, but their grip on power was manifold. The Cenél Conaill also provided Iona with its abbots for many centuries.

Monasticism began in the deserts of Egypt. The sea was the closest thing ancient Irish had to a desert. That is why you would be hard pressed to find an island off the coast of Ireland today without the archaeological remains of a hermitage or monastery. Known in Irish as deorad Dé, exiles of God, monks lived apart from the world and their families. Columba spent the first 43 years of his life on the mainland, where he founded a federation of some 30 monasteries. He spent the last 34 years on the island of Iona where he died in 597. Iona, which likely comes from the old Irish word í, meaning island, then belonged to the Irish kingdom of Dál Riata, which encompassed parts of modern day Northern Ireland and Scotland.

Though we might like to think of humble monks, they too belonged to the elite ruling class. Bright, colourful clothing was a status symbol, with laws governing who could wear what. So, in an act of humility, the monks wore dun-coloured habits of un-dyed sheep’s wool. Sheep were brown in those days. They also shaved their heads in a tonsure unique to the Irish. It’s thought the origin of the monastic tonsure harks back to a time when slaves were identified by their partially shaved heads. A practice monks adopted to mark themselves apart from society, as slaves of God. Many monks would have been ordinary men with wives (plural) and children. The church would not get prudish about sex or celibacy for another while yet. Nonetheless, women were not permitted in the monastery, or to set foot on the islands that housed them. The monastery would have been sanctuary from the turbulence of life on the mainland, where violence and strife were a fact of daily life.

Eating and fasting were all part of ‘the rule’ under which the monks lived. Depriving themselves of food was one way of submitting their bodies and minds. It’s possible Columba may have been more lenient than other abbots, but it’s likely they only ate once a day in the evening. They fasted twice a week on Wednesdays and Fridays. They also fasted for forty days every Easter, Whitsuntide and Advent. Over half the year was spent fasting. There were up to eight periods of prayer throughout the day and night where the monks gathered to sing psalms together. At least three of these ‘offices’ took place between sunset and sunrise. They would not only have been hungry, but often sleep deprived too. When they weren’t praying or sleeping, they worked.

Most of what it meant to be a monk involved mortification of the will through humility and obedience. Obedience to the rule of the monastery and their superiors. Submitting themselves to the will of God. Some monks took this mortification further and practiced bodily penance. Like Caornan’s chains, or Columba’s infamous bed of stone, these practices are best thought of as a form of living martyrdom. They believed in the Devil as much as God, that the forces of good and evil were manifest in all men. God and the Devil waging war inside each of them. These early Irish monks fought hard lonely battles in the desert to expel the enemy within.